A Lesson to Save 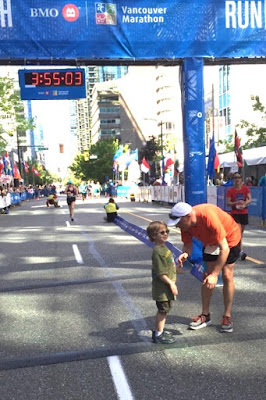 A month ago, I took a shot at achieving a goal that I had been targeting for a while: qualifying for the Boston Marathon. I had spent much of the winter preparing to meet my Boston Qualifying (BQ) goal and headed to Vancouver with the hope that the climate and altitude would give a further boost to my pursuit of the target. The race proceeded well and I was at a promising pace up until the 35K mark when cramps set in.  "Set in" seems a bit too euphemistic actually for the pain that stabbed through my left calf. I tried to run through it a few times, but I resigned to caution in the face of the pain and the looming mid-morning heat.

I walked most of the last 7K, watching the Boston Marathon qualifying time tick away and then the possibility of a time in the 3:30's and then eyed the threat of finishing in over 4 hours.  I picked up my feet and jogged in the last kilometre or so, to summon up a bit of pride that took a particularly hard blow as some idiot in leather thongs trotted passed to glory and the serated stigmata of the leather's carve through his naive feet.

Toward the end, I just wanted to see my son for a welcome smile.  We have been in the habit of finishing together.  The first time I did it, I carried him across the line with me and since that time he has been eager to grab my hand and run through the finish gate with me, thrilled to get that feeling and my medal to boot. Like Jim Valvano, I'd like my son to get practiced in the rituals of victory and celebration and visualize the thrill of the finish line.

On this occasion with disappointment blooming, I wanted to see him for the comfort if nothing else. I slowly scanned the crowd for my wife and my son and thrilled to see them along with my brother- and sister-in-law, who were wary of the mild insanity that congregates around marathon courses. My wife hoisted my son over the high fence and despite everything, he felt light and we were ready to run it in for the finish.

We crossed the line together and my son beamed up at me as he does at the thrill of running as fast as we can when we are coming home from school and he has asked me to hold his hand and run as hard as I can until his spinning legs cannot keep up and he either slides or takes flight upon giving up the effort to keep up.  For him, these few hundred metres to stop the clock are perhaps just another occasion for that thrilling, everyday ride with his dad.

He replied, having heard that I would have been 35, not 62 minutes getting to the finish from the point when he last cheered me on, "It was really long."

And I told him that I too would be proud of him in the face of his disappointments just as he was proud of me and that no matter how bad he would ever feel, I would always have his back.

It might be a lot to lay on a four-year-old, so the picture helps.  I'll be able to remind him or show him that moment when he feels that way and tell him of how disappointment can burn and linger and that in the end it doesn't change anything about the way I feel about him.  Actually, it would likely just make me prouder.
Posted by Pat at 8:56 PM

Pat
A teacher, writer and photographer based in Calgary since 2003.